TextEdit: Here’s to the crazy ones ...

I've been on a Mac for several years now and have been using TextEdit as my "go to" word processor. Its simple, clean and quite powerful for normal day to day text editing requirements. At least for me it is.

Few weeks ago, I noticed the TextEdit icon and wondered if there was any actual readable text on the TextEdit icon. I thought it was probably some random unintelligent text made to look like a typical letter. The though has been bugging me since then but I never got around to finding it. Today, I got the chance and did some Googling. What I found was a pleasant surprise.

The Mac OS TextEdit icon contain an actual letter. Not just a letter, but a very nice poem from Apple's "Think Different" advertisement campaign. It reads: 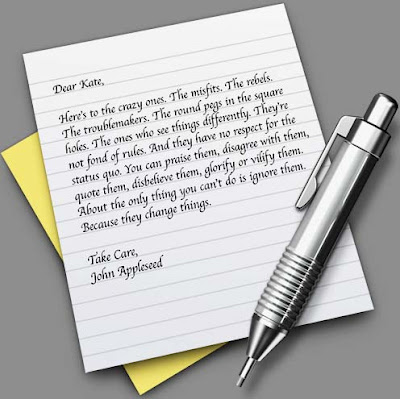 Here’s to the crazy ones. The misfits. The rebels. The troublemakers. The round pegs in the square holes. The ones who see things differently. They’re not fond of rules. But they have no respect for status quo. You can praise them, disagree with them, quote them, disbelieve them, glorify or vivify them. About the only thing you can’t do is ignore them. Because they change things.

I know John Appleseed is fictitious name akin to John Doe that Apple uses in their advertisements, but who is Kate?

Kate is the default text editor for KDE.
http://en.wikipedia.org/wiki/Kate_%28text_editor%29

dude believe me, ed beats 'em all when it comes to simple text editing.

ummm.. nope. Mac is a rip-off of BSD. And guess what? ed is present on any *nix distribution by default. open up a terminal. type ed. you will find it