I have been on Facebook for a long time. I might not be as active as some of my friends, but I do maintain an active account nevertheless.

I have always had issues with Facebook. This is a not a Facebook bashing post. I have done it enough on Twitter as I went along. I'm sure you've heard some of the horror stories.

Facebook isn't all that bad, they do good things sometimes. If I really think hard for a few minutes, maybe I can think of something good to say about Facebook.

When Google+ arrived without much fanfare, Facebook scrambled to give the controls over to the users and they did roll out some cool features. I like Google+ and I think Facebook did too little too late.

Anyways, the problem I'm having now is with Facebook groups. I have searched around in the account settings and privacy settings, and for the life of me, I couldn't figure out how to stop people from adding me to groups. Most of these groups are stupid and I want no part of it. You know you have come across a few groups like that too, right?

We All Support "X" as (Upper North Province) President:
I may even support this guy, but I'm not from that area and I can't vote for him even if I wanted to.

I bet I can find 1,000,000 people who hate Manchester United:
I bet you can, but I'm not one of them. I am just indifferent about soccer on TV.

World of 7-Billion:
I know. So what can I do? I don't think it something I want to celebrate. Leave me out. Thank you.

Various Dhivehi island/atoll news website groups:
So you slapped on -live behind your island name and made a local news website? Good for you. Well I don't want to read it, and I definitely dont want to be on a Facebook group promoting your hatred, one way or the other!

Free The Kimboo:
This may be the first ever Maldivian group I was invited to. I was invited by primary0. I think every social network thereafter had some group or petition to free the Kimboo. On second thought, I think I'll stay in this group just for the heck of it.

After a little Googling, I found out that I actually have no control whatsoever on who adds me to groups or what groups I'm added to. If I don't want to be in a group, my only option is to go to that group and manually leave the group. This is infuriatingly stupid! 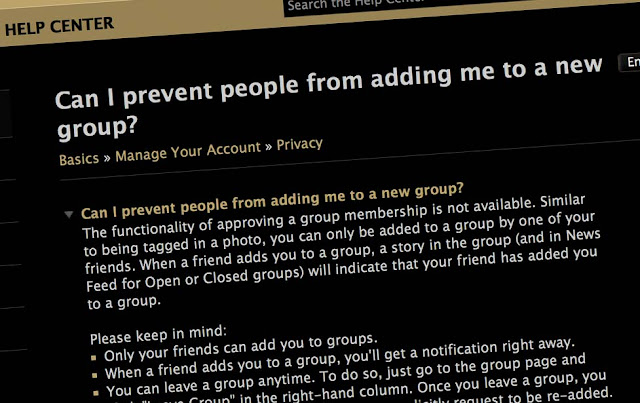 Talk about Facebbok and giving users the control of their content and delivery. Sucks!

My latest problem with FB
I cannot log out.
The logout button has simply vanished.

I am so glad I'm one of the three people left in this world not on facebook :s people have so many problems with fb!

The problem i'm having is unlimited notifications, even if i unsubscribe all for all the events of a user, still getting those annoying notifications.