Scary: sinkholes in the city ... 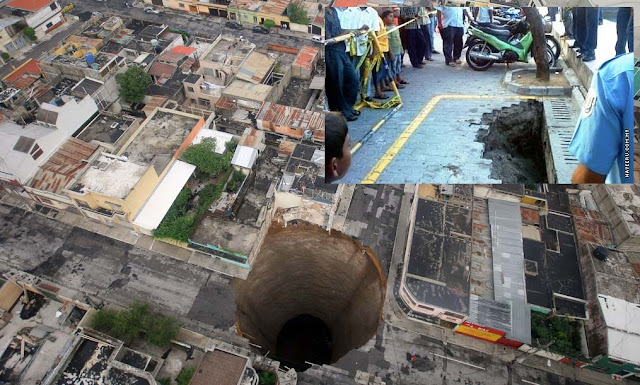 I am sure you have seen the picture above in your local news feeds. Its all over the internet. You must have been shocked to see the picture. My reaction was this was photoshopped or something. When I read the article accompanying the picture, I was like, Holy Shit !!!

The picture is not photoshopped. It is not fake. It comes from the official channels out of Guatemala. Link to official Flcikr stream.

If by any chance you have not seen it, let me explain. What you are looking at is a sinkhole, a natural depression caused by the removal of underground soil by water. This particular sinkhole is 60 feet wide 400 feet deep sink hole. Three of them appeared randomly in Guatemala City few days back.

Most agree that these holes appear to have been triggered by the tropical storm Agatha. Others say, its a piping feature, a nicer name for an underground burst pipe. No matter the reason, one thing is clear, it is darn frightening. Nature can do that to you sometimes.

Living on an island that barely measures 2 square kilometers, and the highest point on land being 3 feet above mean sea level, our only concern has been sea level rise and big waves.

But lets venture a thought, what if a sinkhole like this appears in an overcrowded and congested city like ours? I cannot even begin to contemplate the consequences if something of this nature happens in Malé.

How would the people react? How would disaster management officials work to fix something like this. What would happen to the families who loose their homes, buildings and businesses. Do we have the manpower or technology to repair the damage done? It is a scary thought. Very scary. Not to mention passel of domestic and economic problems that would ensue.

It is not like sinkholes have not appeared in Maldives or in Malé. Sinkholes have appeared near IGMH and some near Nasandhura. Haveeru link here.

According to stories I hear, some have appeared in other islands as well. But as with most things local, our versions are always smaller compared to other countries.

We have always been able to fix most of the things like this that have happened here, and I hope nothing of massive scale ever happens to us. But what if ...

Am not trying to blow anything out of proportions. Am not even trying scare anyone. I just wanted to take some time and remind us how insignificant we are against nature. How unprepared we are for something of this nature and magnitude.

Nice post and well said. It IS scary. And my first thought when I saw the pic at first on some news website was that too - that its photoshopped.

naina ::
yeah i thought so too at first ... but my news reader had an article claiming the pics were from the official channel ...