So, about the foul-mouthed wedding ceremony video ... 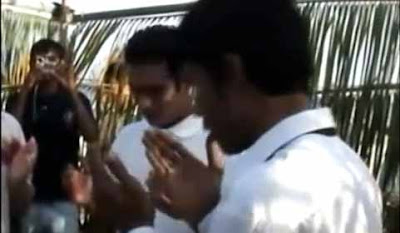 It is all over the internet. I am sure you would have already seen the amateur video of the foul-mouthed wedding ceremony by now. The video shows celebrants of a muslim wedding ceremony reading some nasty stuff in local language in a prayer like fashion to the unsuspecting foreign couple in a tourist resort. Foreigners cannot get officially married
in the Maldives, this was a celebration to renew vows. Nevertheless, it was a shameful and a derogatory act by the celebrants. It should not have happened.

A lot have happened in the week following the release of the amateur video on YouTube. The celebrants of the ceremony have been taken in to police custody for further investigation. Government authorities have issued official apologies. The tourist couple have been identified and promised full compensation. I am also of the opinion that the management of the tourist facility should also be investigated for lack of proper care to their clients.

I was shocked and deeply saddened that something like this happened in my country. A country which relies heavily on tourism, where the market for foreign "weddings" is on the rise. Articles on local blogs and social networks show that most Maldivian share my sentiments. I was equally shocked and flabbergasted that an incident like this was reported in a local English language newspapers, with word to word translation of the reading at the ceremony, ensuing which, the story
was picked up and reproduced in several major international newspapers.

It is a fact that a free media is important to a democracy. The media plays a crucial role in todays world. It is the conscious keeper, watching over the functionaries of society and it attempts to attend to the wrongs in our system by bringing them to the knowledge of general public, hoping for rectification.

But there is an often neglected but an important aspect to media, it is called responsible journalism. No content should be published in the sole intention of expanding readership. The editors of online newspapers know well that regional readership is a thing of the past and anything that they publish on their website can and will be viewed globally. If the media aspires to become a respected institution, it should make a genuine effort to strike the precarious balance between engaging content, entertaining the reader, and possible consequences of their reportage with national interest at heart. There are certain domestic issues that do not need to be broadcast world over.

This particular incident happened in a secluded tourist resort, and could have been handled without it being reported on BBC, CNN, The Telegraph, The Independent, China News and all big name news outlets of the world. Just because an article can attract traffic to a website does not justify its publication. It is quite evident, the approach of some branches of the media to this story was not only irresponsible but also positively damaging to the dream destination image of this
country.

I also found it hard to believe that heads of government offices were giving out interviews about the incident to foreign media. I thought the government would be doing everything that they possibly could to contain the problem and mitigate the damages. Top level government officials answering questions by foreign media in the hope of lessening the impact may have just attracted more attention to the event.

I hope this is the last incident of this kind to ever happen in this country. We need to make people more aware that tourism is no fair game, but each and every tourist should be treated with care and respect. It is the money that they spend here, that drives our economy. It is the revenue from the tourism industry that help us survive as a nation and as a country.

One more thing. I got married a few years back, and like all Maldivians, I had a muslim wedding ceremony. A good share of the
ceremony was conducted in Arabic, and like most Maldivians, I have absolutely no clue what they said. Hmmm.

"a good share of the ceremony was conducted in arabic" what is a good share?? what was the ratio of dhivehi to arabic, ... remember i was there on the ceremony... so no cheating.....

you can't blame the media for publishing it.

totally agree with you, i also believe the online news paper is trying to broadening their readership by ruining the whole country's name. They need to be fined by uploading the whole conversation's subtitale in english to youtube. just like they deducted points from a local tv channel. Also how come the dhivehi word "balhu" changed to "swine" on their subtitle. if i am not wrong it is suppose to be "dog"

Anonymous ::
Well I am not putting the blame on media ...
I'm saying some branches of media were irresponsible ...

Vathuthashi ::
Yes, it was a move to viewership for sure ...
But reporters have a tendency to wringing out all interest out of a particular story and move on to other stories ...
Lets hope this happens really quickly this time :)

Minivan news should have censored the couples' faces when they also did so much effort to translate and recreate the video.

Yafaau's daddy ::
Yes, they should have done that ...
The release of video has violated their privacy for sure ...

Its not the only incident it seems, I hear there is another video though I don't know the authenticity of it. But recently on Haveeru just a day or two after this incident, I read of 4 waiters being "high" on drugs and robbing some tourists rooms while some tourists were in the room! I mean seriously WTH?

Its like some people really want to ruin the economy of this country which primarily depends on our tourism. Can't even calculate the loss this would cause us. And I don't believe its just a few people they should have take in to police custody for this, how can this be blamed on just a few people? There was a whole lotta Maldivian audience in the background and not even one of them decided to report these people to the authorities.

And shame on the person who actually leaked it. It maybe a grudge or something, or just for fun, but still, is that person out of his mind not to think before leaking such a thing to the public?

And like Yafaau's Daddy said, Minivan news should've had the decency to atleast censor the couples faces with that much effort they put into translating the video.

There's no point in trying to cover anything up. It was all over when the video hit Youtube. Heck, I would have subtitled the video it myself if Minivannews didn't do it. Tourists coming to the Maldives have a right to now how they can expect to be treated.

ieccco ::
Yes, i have heard that it may not be the only incident ...
But one has one understand that when so many people are working in resorts, there are bound to be people who do not respect their jobs as they should ...
Things happen, i am not defending them, but the way the some branches of media handled it was irresponsible ...
They could have handled it better i think ...

canofworms::
I agree with you to a certain extent ... and respect your enthusiasm ...
Sure, tourists coming to the Maldives have a right to now how they can expect to be treated ... I will give you that ...
But just one incident where no one came to any "harm" should not have been made available on all newspapers on the planet ...
We could have handled it differently ...
Sometimes, containment pays off in the long run ...

All newspapers should have this. That's why they do have it.

You are trying to hide the behaviour of criminals instead of protecting visitors. Everyone should know about this because everyone is a potential victim of this crime in your country.

You wanted your country to "handle it", you're surprised government officials spoke to foreign media? You are not trustworthy! You want to restrict the media...yet you are yourself using the internet!

Stop trying to "restrict" and "contain" crimes that happen against tourists!

Its a shame this happened. Resort management should do a better job of monitoring their staff activities on the job. I believe that resorts should also do a background check on all employees before employment. I hope we can recover from this negative attention.

Some people don't realize that these type of actions can affect on a whole majority, as being employed in the tourism industry myself i strongly don't find it any much amusing. The management is all to blame.